First order of business was picking a site.  A few potential sites were identified and based a set of criteria eventually narrowed down. A unanimous final location was the Rice County Courthouse adjacent to the current Civil War Monument.  Next the committee presented the idea to the Rice County Commission and received preliminary approval pending a final design and site plan.

The committee then embarked upon the arduous task of design meetings with several potential designers and architects. In early 2008 the committee settled unanimously on certified Memorialist Jeff Anderson from Anderson Memorials of Austin.  Jeff has extensive knowledge of memorials having assisted on several award winning the designs and implementation of Veterans Memorials around the state and country.

A community meeting was organized March of 2008 where ideas thus far were presented and input solicited from those in attendance.  Most wanted an expansion dedicated to the veteran and branches of the service, not war memorial, but with a heavy emphasis on the sacrifice of the warrior.  These ideas were cataloged and taken back to committee.  Several more meetings were held throughout the summer of 2008 refining the design details.

Once comfortable with the design and scope of the project I & S Engineering of Faribault was approached and put together an in-kind artist rendition and site plan for the project.

The committee then focused on developing brochures, promoting paver sales and brain storming other fundraising possibilities.  Things slowed down late 2008-early 2009 as vacations and decisions over granite temporarily stalled the project.  The committee re-focused in April-May of 2009, clarified design issues with Anderson Memorials.  In June of this same year the committee under leadership of construction chair Paul Johnson set a ground breaking date of July 11, 2009 almost 92 years since dedication of the Civil War Monument.

The Memorial′s design places a series of symbolic elements around a central plaza.
in the center of the plaza is a Rice County map and torch to which is affixed a life-sized bronzed eagle flying protectively with a dove.  Focusing one′s attention within the memorial, this sets the overall theme; the flame declaring our never ending vigilance, an eagle representing the strength and power of our nation, the dove symbolizing peace and security, the ultimate goal of a strong military.

A series of asymmetrical granite colonnades surround and encompass the memorial. These colonnades, illustrating strength and stature, support granite tabloids and inscribed headers paying tribute to the six branches of military service.  Asymmetrical positioning portrays an unpredictable world and the dissonance of war.

Walk ways will be line with 8″x20″ pavers honoring those serving or who have served during any period interspersed with historically relevant informational pavers.  The paver lined sidewalks will enter and exit the memorial from opposite corners creating a circular flow throughout.

Two benches within the memorial will provide a location to sit and reflect.  Benches will also be intermittently placed along the paver lined sidewalks.  Gardens opposite the sidewalk entry points will honor those KIA “Killed in Action” and MIA “Missing in Action” with a smoothed faced granite rock, foliage and flowers.

A trio of flag poles will line the area between the courthouse and memorial with the American flag at 35 foot and center flanked by 30 foot POW/MIA and Minnesota State flags.
The Rice County Veterans Memorial was designed by the Rice County Veterans Memorial committee with assistance from Jeff Anderson of Anderson Memorials, Inc., Austin, Minnesota. 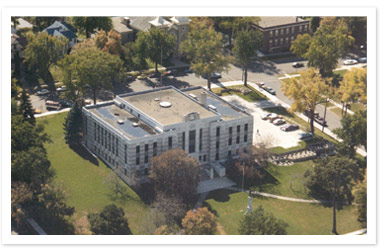 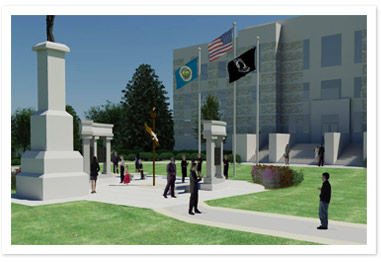